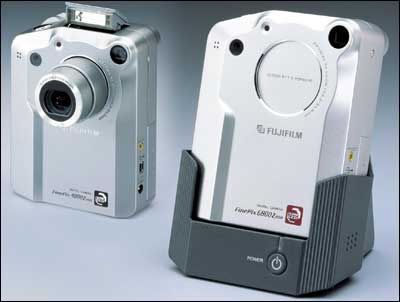 Fuji Photo Film U.S.A., Inc. today unveiled the two newest models in its signature series of digital cameras, the FinePix 6800 Zoom and the FinePix 4800 Zoom, thus ushering in a new era of digital picture-taking, multifunction and design. The new FinePix cameras will make their first North American appearance at the Photo Marketing Association trade show in Orlando, Florida on February 11, 2001.

The FinePix 6800 Zoom — equipped with a new Fujifilm Super CCD sensor and image processors — and FinePix 4800 Zoom produce crystal-clear pictures with rich, true-to-life colors. In addition to their imaging abilities, the cameras offer a host of useful features that will appeal to a wide range of consumers and businesspeople, such as videoconferencing, image voice annotation, the ability to capture either up to 160/80 seconds (FinePix 6800/4800 Zoom) of AVI video with sound or record up to 60/30 minutes of audio. The cameras’ sleek and stylish look — which is based on the compact, vertical form of Fujifilm’s 700 series cameras — was conceived by F.A. Porsche, the same designer that brought the world the distinctive and timeless look of the classic Porsche® 911™ sports car.

“With the FinePix 6800 Zoom, Fujifilm wanted to take the perception of the digital camera as a cool, multifunctional tool to the next level,” said Darin Pepple, Brand Manager, Consumer Digital Products, Consumer Markets Division, Fuji Photo Film U.S.A., Inc. “To accomplish this, first we improved the camera’s picture-taking ability by creating a new Super CCD sensor for the FinePix 6800 Zoom and coupling it with a newly enhanced image processor. It’s the enhancement of the image processor, we believe, that will bring out the performance capabilities of the Fujifilm Super CCD sensor.”

“Second,” Pepple continued, “F.A. Porsche lent his style interpretation to create a new esthetic that will definitely turn heads. Third, because consumers — especially businesspeople — are looking for products that meet a variety of needs, we’ve incorporated a number of today’s most in-demand options into two high-quality, FinePix digital cameras.”

With these added features, users can now attach 30-second voice notes to each picture and create business trip-travelogues or narrated family albums. Also, the cameras can be used as PC-cams for videoconferencing, permitting users to communicate, live, with loved ones, friends and business associates online. And because they can record up to 160 seconds and 80 seconds, respectively, of AVI video with QVGA motion JPEG at 10 frames-per-second, FinePix 6800 Zoom and FinePix 4800 Zoom owners can capture and then forward special moments over the Internet to others around the world. Finally, with audio recording capabilities of 60 minutes and 30 minutes, respectively, the FinePix 6800 Zoom and FinePix 4800 Zoom can be used for dictation.

“Portable, multifunctional devices that serve a variety of consumer needs have always enjoyed a presence in the market,” explained Chris Chute, Research Analyst for the Digital Imaging Program at IDC. “Digital cameras are naturals for such convergence, due to their size, consumer appeal and compatibility with other mediums. We believe that such convergent devices, especially those used for digital imaging, will continue to be successful in the market as long as they remain easy to use and can produce eye-pleasing images.”

With its new image processor, the FinePix 6800 Zoom is able to deliver images with greater edge detail while retaining the outstanding color for which the Fujifilm Super CCD has become renowned. The FinePix 6800 Zoom is built with a 3.3-million-sensor Super CCD that can produce a 2832 x 2128 pixel image file. The FinePix 4800 Zoom has the highly acclaimed 2.4 million-sensor Super CCD found in the FinePix 4900 Zoom, which is capable of producing a file image as large as 2400 x 1800.

While offering the ease of a point-and-shoot camera, both digital models are equipped with functions that are of interest to the more discerning photographer. These include a fast (f/2.8) 3x Super EBC Fujinon aspherical zoom lens with a focal length equivalent to a 36-108 mm zoom on a 35mm camera, while offering macro capability to approximately 7.8 inches. Both also include Fujifilm’s smooth digital zooms: 4.4x for the FinePix 6800 Zoom and 3.75 x for the FinePix 4800 Zoom.

For simple-to-set, accurate exposure in typical shooting situations, the cameras have five programmed exposure modes: auto, portrait, scenic, night and full manual. For total user-control, there are three metering modes (average, multi-zone or spot) and 64-zone TTL metering with programmed auto-exposure, along with exposure compensation for accurate exposure under the most challenging of lighting situations. Users also have the option of an advanced automatic or six manual white balance settings that include fine weather, shade, fluorescent 1, fluorescent 2, fluorescent 3 and incandescent.

Shutter speeds range from 1/4 to 1/2000 second in auto mode and from 1/2000 second to three seconds in night mode. The FinePix 6800 Zoom carries an adjustable ISO sensitivity of 100/200/400, while the FinePix 4800 Zoom has 125/200/400 sensitivities. The cameras’ pop-up flash provides five modes: automatic, red-eye reduction, flash-on-demand, flash cancel and slow synch flash for motion effects.

Once the picture is saved, Fujifilm will provide the user with easy entrance to the Internet imaging world through a newly designed, FinePixViewer software program that will be included along with the FinePix 6800 Zoom, FinePix 4800 Zoom and other new FinePix digital cameras. At the click of a few buttons, the FinePixViewer will link users directly to the World Wide Web for answers to frequently asked questions, picture taking tips, support utilities, updated drivers and the receipt of periodic and pertinent promotional announcements from Fujifilm. The videoconferencing program of the FinePix 6800 Zoom and FinePix 4800 Zoom is also handled through the FinePixViewer.

The FinePix 6800 Zoom and FinePix 4800 Zoom will be shipped with PC-sync cradles into which the cameras can be placed both for direct connection to a PC for videoconferencing, image transfer via a USB cable and for recharging each camera’s lithium ion battery.