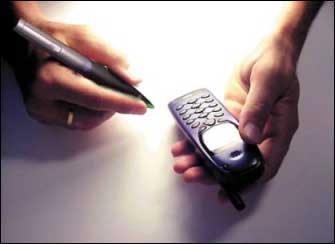 GOU Lite Ltd., an Israeli company specializing in optical technology, has developed a pen-like product that enables writing messages into digital devices – anywhere and anytime. The product is believed to create a breakthrough in the way people interface with their cell phones and handheld computers.

Imagine this: Instead of having to hit the tiny buttons on your cellular phone, you simply write your text – SMS, E-mail or signature – on any surface available. The Virtual PenTM (VpenTM) is based on patented optical technology: The VpenTM measures its motion relative to any writing surface and transmits the information via Bluetooth link to cell phones, PDAs, set-top boxes or PCs. IDEO, a world-leading product design company, which has designed such award winning products as the Palm V and the Visor, is designing the VpenTM. Considering the enormous potential for the VpenTM, IDEO’s Israeli affiliate has also chosen to join GOU Lite’s investors’ portfolio.

“Players in the market have been looking for ways to have the cellular handset evolve into a data device, and input has always been a challenge,” comments Sven-Christer Nilsson, former CEO of Ericsson and co-founder of Startupfactory, who now joins the GOU Lite Board of Directors. “When we met GOU Lite and examined their VpenTM, we suddenly realized that they had found an excellent solution to this problem”.
Erez Aluf, Managing Director of STI Ventures’ advisory arm in Israel, adds: “The VpenTM allows people to input text and signatures the way they have always wanted to – simply by writing it.”

The VpenTM is expected to hit the market within a one year time frame and GOU Lite is already engaged in discussions and activities with leaders in the cellular industry, as well as with potential partners in the fields of PDA, PC and set-top boxes. “Take for example, the current market for SMS – 12 billion SMS messages are being sent worldwide per month by punching buttons endlessly. Imagine how much this market could be increased, if the cellular operators were able to offer their customers the most natural way of inputting text”, explains Gilad Lederer, CEO of GOU Lite. “In addition, those customers could now secure the transactions they make on the web or through their phone with their own signature.”

Investors are STI Ventures, an international early-stage investment company with an emphasis on Israeli technology, and Startupfactory, a top Nordic venture-capital firm based in Sweden, Finland and the Netherlands. This is a first step in a partnership agreement that establishes STI as Startupfactory’s affiliated partner in Israel and Startupfactory as STI’s affiliate in Sweden and Finland.