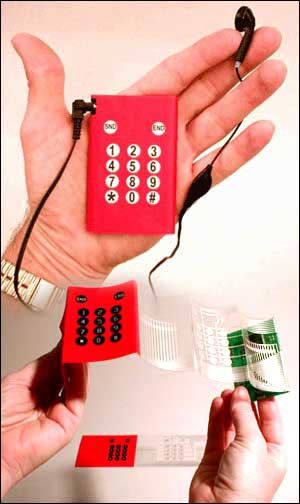 Start kicking yourself for not thinking of it first: the disposable cell phone.

The idea to ”chat and chuck” occurred to inventor Randi Altschul of Cliffside Park, N.J., as she was fighting the temptation to heave her cell phone out the car window after a call was dropped.

Now several years and two dozen patents later she’s poised to hit the market with what is essentially a paper cell phone that you toss out just like a disposable camera when you’re done with it.

”We’ve hit a nerve with this,” the high-strung Altschul blurted. ”The response has been tremendous. I’m hearing from investors worldwide.”

Altschul has married two of America’s favorite activities — yapping on the phone and throwing things out.

The toy designer with no prior experience in electronics said she developed the phone by surrounding herself with experts who shared her ”conceive-it, believe-it, achieve-it” attitude.

She hopes to have a production model ready in several months and then hit store shelves sometime next year.

The phone would provide 60 minutes of calling time for less than $20.

The key to the device is its ultra-cheap, ultra-thin circuitry made by applying metallic conductive inks to paper.

A $2 or $3 rebate for returning the phone instead of throwing it out would encourage recycling.

Marketing and exact price are still up in the air.