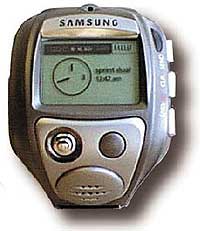 It’s called the Watch Phone and the few lucky souls could be seen wearing early versions of it at last weekend’s Consumer Electronics Show in Las Vegas. Having already been released in South Korea, electronics giant Samsung says that it will unleash the unit on U.S. markets before June with an as-yet unnamed mobile phone carrier. No more prototypes. No more concept phones.

Measuring 3.5 inches by 2 inches, and an inch thick, this code division multiple access phone may feel like a monster on your wrist. But you won’t mind the first time you try the voice-activated dialing feature and then talk using the speakerphone, will you?

The Watch Phone also comes with the standard features available on most mobile phones. It can store 229 numbers, has voice mail, caller ID, call forwarding and call waiting. It also supports short-text messaging and will read text messages to you. Or, if you would rather read them yourself, the display screen is a 128-pixel by 64-pixel liquid crystal display that can show five lines of text.