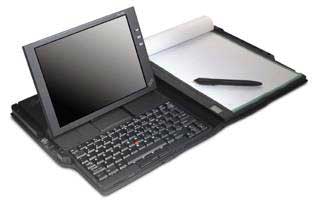 IBM on Friday unveiled a new laptop that aims to appeal to technophiles and technophobes alike. The TransNote combines IBM’s ThinkPad mini-notebook with a scribble pad that can translate and record notes written on paper to the PC.

IBM says that the design of the new notebook computer will be the first in a series of such devices that address some of the more basic ways people record information on the go, such as the basic practice of taking notes on paper.

The popularity of handheld devices and other portable information gadgets has changed the way we carry and store information. Yet Rick McGee, vice president of marketing for IBM’s mobile brands, said research showed that people often still resort to old standbys.

“A lot of people still use pen and paper. That has not gone away. But they also use notebooks. So we thought we could match them together.” McGee said.

TransNote owners will be able to enter data via a keyboard, a touch screen or by writing with a pen on a pad of paper. When a person doodles on the paper, transceivers underneath the pad track the movement of the pen, transmitting the information via handwriting recognition technology to a text file.

The whole notebook comes wrapped in a portfolio-like cover that when folded, can allow an owner to use either the ThinkPad or the paper pad individually.

Radical notebook designs aren’t a new thing for IBM, which has often ventured outside the beige box for new looks. One classic example is the company’s ThinkPad 701C’s butterfly keyboard design.