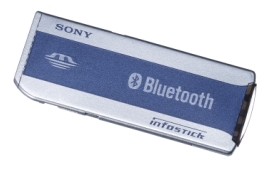 Sony Corporation demonstrated working prototypes of the “Infostick” Bluetooth module at CES 2001 International. This is part of an ongoing effort to develop the Memory Stick Expansion Module, which utilizes the form factor and interface terminals/protocols of the Memory Stick to add various hardware functions to compliant products.

By inserting an Infostick into Memory Stick Expansion Module compliant products such as digital cameras, personal computers, televisions, etc., quick and simple wireless data exchange can be conducted between the hardware via radio waves. The featured prototype has a transmission range of approximately 10m, and transfer rate of 1Mbps in accordance with Bluetooth specifications.

Having developed the basic prototype, Sony will now work to explore new possibilities for the Infostick to add new functions such as Internet access capability and network setup capabilities.