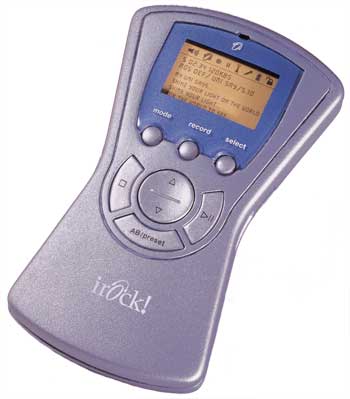 First International Digital, Inc., a Motorola spin-off with nearly 100 patents in audio, video, speech and communications technology, today showcased its newest, feature-packed, portable MP3 player – iRock 680. An industry first, the iRock 680 features patented proprietary software called “MP3K,” a karaoke function that allows the user to view the song’s lyrics in synchronization with the music. Additionally, the user can record his or her own voice along with the original recording – in effect, “cutting their own tracks”. With 64MB of removable, expandable memory, a built in FM tuner and voice recorder, the iRock 680 is arguably the most feature packed digital audio player in the industry.

Available in North American retail outlets in February for an estimated retail price of $249.99 to $299.99 (depending on version).

“As the demand increases for more cutting-edge features in digital audio players, the iRock family is designed to meet this need with exciting innovations,” said Randy Cavaiani, Vice President of Marketing & Sales for FID. “With pristine audio quality, innovative new features like MP3K karaoke, a convenient FM tuner, and a built-in microphone for those quick notes or recording songs, the iRock 680 will appeal to a broad audience. Going forward, FID will continue to leverage its extensive software patent portfolio, creating exciting new features and interactivity – karaoke is just the first surprise on our roadmap.”

The iRock 680 is much more than just an MP3 player:
· Bring your iRock 680 to the party for Karaoke fun! Using its new MP3K feature, sing along to songs downloaded from www.myirock.com. Plug your player into a home or commercial audio system.
· The iRock 680 now features a built-in FM tuner.
· Share your music with a friend – the iRock 680 comes equipped with two headphone jacks.
· MP3s and more! The iRock 680 is conveniently multi-format and text ready.
· Take notes with the iRock 680 voice recorder feature using the built-in microphone.

First International Digital’s iRock 680 MP3 player features 64MB (two 32 MB MMC cards) of removable, expandable memory, allowing listeners to store and play back up to two hours of high-quality digital music. For exceptionally fast download times, the iRock 680 is USB compatible.
Contoured to fit comfortably in the hand, the iRock 680 has a sleek, ergonomic design. It has a belt clip, desk stand and extra MMC cardholder for added convenience. The amber display of the iRock 680 is backlit, making it easier to operate in varied lighting conditions. The display uses easily understood icons for quick navigation through the player’s features.