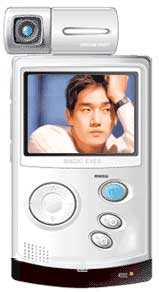 MkiVki, as a visual music player, is the first portable equipment that enables the user to edit the image and music randomly and play them. Unlike MP3 players that can only play music, the user can view music video and, take and edit moving/still pictures so that the user can enjoy creating his or her own culture, which can appeal to the “N generation”.

MkiVki, same as a cigarette pack in size, holds the combination of 6 functions – MP3 player, digital camera, digital camcorder, TV, game player, and PDA. Customers can not only listen to the music or take still pictures but also enjoy MP3 music while watching music video or store TV or video clips. They can also edit image and music randomly and play them, and take and edit video clips, which can appeal to the N Generation who enjoy their own culture.

The MkiVki users can enjoy network games among themselves with IrDA and Serial port and they also can transmit the electronic album they edited. As the equipment support USB, the data can be basically stored and edited in PC. The new product is composed of its body and five options including digital camera, TV tuner, GPS, wireless communications and keypad. Currently the prototype is completed of its development and with more work on design and marketing, and it will be mass-produced from the late January next year. Though the price will be different depending on the number of options, it will be set around $200USD.

As the market price of PDA is from $200USD to $600USD while MP3 player ranges from $100USD to $500USD won in price, accordingly, the new product has a price competitiveness. The temporary model for the new product is named as MkiVki, meaning “music jockey and video jockey” as it is targeted for the N Generation. In release of the new product, the company will open an Internet website for MkiVki users highlighting the model name so that they can form a community and download required contents.

The product will be released in the first half of 2001.