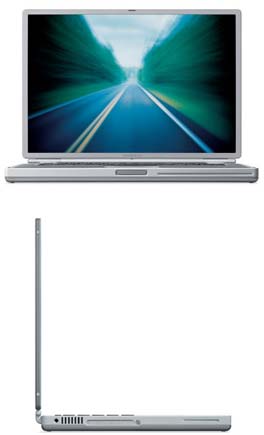 “The all new Titanium PowerBook G4 is the most revolutionary portable computer ever created,” said Steve Jobs, Apple’s CEO. “Its a ‘supercomputer to go’ in terms of performance, yet it’s thinner and sexier than the best subnotebooks.”

PowerBook G4 users can also manage their digital music collection on the go with Apple’s new iTunes software, the world’s best and easiest-to-use “jukebox” software. iTunes lets users import songs from their favorite CDs; compress the files into the popular MP3 format; organize their music using powerful yet easy to use searching, browsing and play list features; watch stunning visualizations on their computer screens; and tune in to hundreds of Internet radio stations.

PowerBook G4 is AirPort ready with a built-in slot for the AirPort Card and two built-in antennas for communicating with the AirPort Base Station. AirPort, Apple’s revolutionary wireless networking solution, provides totally untethered Internet access at speeds up to 11 megabits per second.

Pricing & Availability
The new PowerBook G4 line will be available in January through The Apple Store™ (www.apple.com) and Apple Authorized Resellers in two standard configurations:

Additional build-to-order options for the new PowerBook G4 include: a 30GB hard drive; up to 1GB of SDRAM; and the AirPort Base Station and AirPort Card; and the AppleCare Protection Plan.

* Based on 12 commonly used actions in Adobe Photoshop 5.5.
** Weight includes battery and DVD drive, and varies by configuration and manufacturing process.