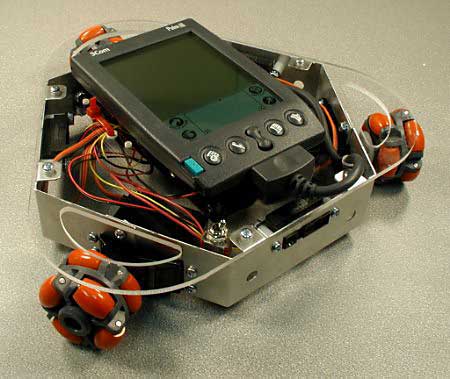 Palm Pilot application No. 413: sending it for coffee.

Ambitious owners of personal organizer can now move beyond such passe uses such as making phone calls, ordering movie tickets, or snapping photos. Their Palm can now be turned into a robot.

With a $300 kit available over the Web, everyday people can turn their Palm Pilots into the brains of a small, six-sided robot with three red wheels, equipped with infrared sensors and rechargeable batteries.

The device, developed at Carnegie Mellon University and licensed to a Boulder, Colo.-based robotics company called Acroname, has few, if any, practical uses today. But it could help inspire a new passion for robotics among the general public, its seller said.

“I think this is primarily a teaching and instructional tool,” said Steve Richards, the founder of Acroname. “It’s a way to get involved in robotics with a very accessible tool.”

He has already sold a few hundred of the robots, and expects to sell more than 1,000 this year.

Research universities and government laboratories have long been experimenting with robots for defense applications, such as disarming mines, attacking enemies on the battlefield, and taking pictures of enemy terrain.

But by allowing millions of individuals with personal organizers to experiment with a robot in their own homes, robots could find more uses in people’s daily lives. Putting together the $299 robot, officially named the Palm Pilot Robot Kit, requires only a screwdriver. Once it’s built, the Palm is slipped in and the robot is ready to go.