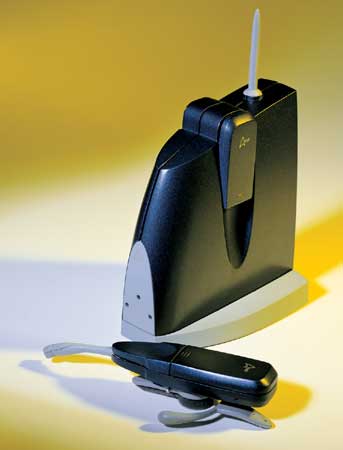 ArialPhone Corp., of Vernon Hills, Ill., today announced its company launch as a provider of wearable, wireless earset communications devices and voice-enabling software applications. With the announcement, the company marks the creation of an entirely new category of wireless communications product that provides a more convenient and effective way for consumers to place and receive phone calls – whether via the Web or through traditional methods.

ArialPhone Corp. will make its debut at the Consumer Electronics Show (CES), Jan. 6-9, at the Las Vegas Convention Center, where it will preview its new product, the ArialPhone, in booth #6625, North Hall 3 and 4. Weighing approximately one ounce, the ArialPhone is a hands-free device that fits comfortably onto the userxs ear and makes use of built-in voice recognition. This innovative, patented design enables users to walk freely throughout their homes or offices, placing and receiving telephone calls, even interacting with a personal computer, solely through voice commands.

Available through the companyxs Web site (www.arialphone.com) and other sales channels starting in the second quarter 2001, the ArialPhone is ideal for independent, small office/home office (SOHO) professionals who rely heavily on telecommunications.

xBy simplifying and accelerating the customer contact process, the ArialPhone provides a comfortable way for busy professionals to maximize both their personal productivity and their earnings potential,x said Jim Alland, co-founder and chief executive officer of the company. xAlthough the first applications being introduced in the second quarter will be based around improving standard telephone and Internet calling processes, future applications will enable voice control of digital entertainment and other home automation functions, such as changing TV channels; recording TV programs; controlling digital music players, set top boxes and cable modems; and even turning lights off and on.x

The SOHO professionals that make up ArialPhone Corp.xs target market are self-employed or highly commissioned individuals who utilize a PC and the Internet to perform job functions. These professionals represent 39 million Americans, or 16 percent of the population. In 1999, there were an estimated 20.7 million income-generating home office households in the U.S. alone. According to International Data Corp., a research and analyst firm, the SOHO segment is among the fastest growing of all U.S. businesses today, with a steady growth rate of 30 percent over the last four years.

Whereas conventional wireless devices used in the home have a limited range and poor voice quality, ArialPhone offers top-quality communications within a 150-ft. range – even through walls. Moreover, unlike the bulky over-the-head phone headsets marketed by many companies, ArialPhonexs sleek, lightweight earset easily attaches to the ear via a comfortable, ergonomically designed hook that can be worn all day. A single xaction buttonx alerts the ArialPhone base station, which is attached to a PC, to listen for voice commands from the user.

To initiate standard or Internet phone calls, ArialPhone users issue simple voice commands, such as xCall John Smithx. These commands direct the device to access an existing PC-based contact management directory. The call is then placed as directed.

The product enables users to perform automated functions such as voice dialing by name, call screening, and PC and Internet operations while walking around the home or office. In addition, the ArialPhone earset can be used as a wireless microphone for software applications that utilize voice input.

The ArialPhone requires no customization and is ready to use xout of the boxx. It consists of an earset and a base station, and must be used with a PC for telephone calling, contact management access, Internet calling and other operations. Incorporating speaker-independent voice recognition technology, the ArialPhone enables the use of intuitive and natural language-based commands, eliminating the need for any voice training prior to operation. And, no PC integration on the part of the user is necessary: the device accesses PC-resident contact management systems via a dynamic interface. Currently, ArialPhone Corp. offers such an interface to Microsoft Outlook and Outlook Express, with interfaces to other leading contact managers slated for availability later this year.

Installation is simple: the base station connects with the userxs PC via a Universal Serial Bus (USB) interface, and with the telephone system through a standard phone jack. The earset communicates with the base station via a 900MHz digital spread spectrum radio frequency link.

A single, rechargeable lithium ion polymer battery powers the ArialPhone earset, providing a xtalk timex of two-to-three hours; the recharge time is approximately two hours. The base station has two charging slots and comes with two batteries, so there will always be a fully charged battery available to allow an infinite amount of xtalk timex. If the battery runs low during a phone conversation, the earset will generate an alert. The phone connection will be held while the user replaces the battery. The simple battery exchange process takes only seconds.

The ArialPhone xopen platformx design enables third-party developers to use the companyxs voice user interface to power their vertical market software applications. Remote dictation of medical notes, completion of legal forms and public safety documentation are only a few of the numerous possible future applications envisioned by ArialPhone management through third-party development efforts. Because of its modular design, the ArialPhone software will also be able to work with headset devices from other manufacturers in the future.

ArialPhone sales and shipments will begin in the second quarter 2001. With a list price of $399, the device can be purchased from the ArialPhone store on the company Web site (www.arialphone.com) as well as through select SOHO-focused catalog, e-commerce and retail channels. To extend its market penetration further, ArialPhone Corp. will also form strategic alliances with providers of complementary products and services. These partnerships will be utilized for cross sales and joint promotion opportunities.