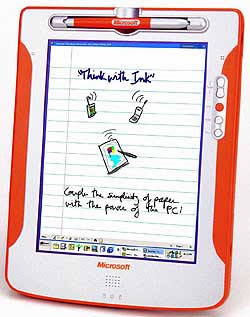 Chairman and chief software architect of Microsoft Corp., unveiled a new direction in PC technology during his keynote address when he demonstrated a working prototype of a Tablet PC: a full-function Microsoft® Windows® operating system-based PC incorporating the convenient and intuitive aspects of pencil and paper into the PC experience.

A long-cherished goal for technology visionaries and computer designers, the Tablet PC will represent the next major evolution in PC design and functionality. While retaining the full power to run all existing Windows-based software applications, the Tablet PC expands enterprise computing to address previously unmet needs such as the ability to take notes at meetings, annotate existing electronic documents and presentations, and read on screen easily. By allowing users to input into their PC using only an electronic pen and a few buttons, rather than with a keyboard and a mouse, the Tablet PC will provide new opportunities and technology directions for the PC hardware and software communities.

Gates hailed the Tablet PC as a clear example of how the original vision behind the PC — giving users personal empowerment and choice — continues to evolve into new form factors and applications.

“The Tablet PC extends the power of personal computing into exciting new areas,” Gates said. “Combining the simplicity of paper with the power of the PC will enable people to be far more productive. It makes a PC an even more valuable tool for enterprise computers who spend time in meetings or away from their desk.”

The Tablet PC is a new computing device, optimized for mobility and designed to be convenient, light and ergonomic. The Tablet PC technology enables any Windows-based application to take advantage of pen-based input. And through extensions to Microsoft Office optimized for the new platform, the Tablet PC can function as a sheet of paper. Handwriting is captured as rich digital ink for immediate or later manipulation, including reformatting and editing. The linkage between the pen input process and a wide range of Windows-based applications will give users new ways in which to collaborate, communicate and bring their PCs to bear on new tasks (e.g., annotating and updating documents on the fly and then wirelessly transmitting the finished version.)

The Tablet PC’s full Windows capability also will enable it to be users’ primary computer. Gates expects that OEMs will build Tablet PCs with docking hardware that will connect to a keyboard and/or a large monitor for desktop usage.

Utilizing a high-performance X86 chip architecture, the Tablet PC takes advantage of key technology improvements in high-resolution, low-power LCDs; efficient batteries; wireless connectivity; and data storage to deliver a rich set of functionality that adds the dimension of pen input. The actual shipping versions of Tablet PCs, from a variety of hardware manufacturers, will vary in specific size and design implementations, but all will embody the historic design goal for a Tablet PC: to make a thin, lightweight device that slips easily into a briefcase or portfolio and can be held in one hand, just like a paper tablet.

“The Tablet PC represents a major advancement in usability and functionality,” said Dick Brass, vice president of Technology Development at Microsoft. “Desktop and laptop PCs are great at what they do; so are handheld devices such as Pocket PCs. What the Tablet PC provides is a very natural way to interact with a computer — by writing on it — without sacrificing the power or utility of Windows-based desktop applications. And the Tablet PC is intended to be a very flexible platform going forward. We believe that rich digital ink will offer software developers the opportunity to bring exciting new products to the market that we can’t even imagine today.”

Gates did not elaborate on details about potential hardware partners, possible pricing or shipping dates for Tablet PCs. “We expect to have lots of news about the Tablet PC going forward,” Gates said. “We are incredibly excited about its prospects.”