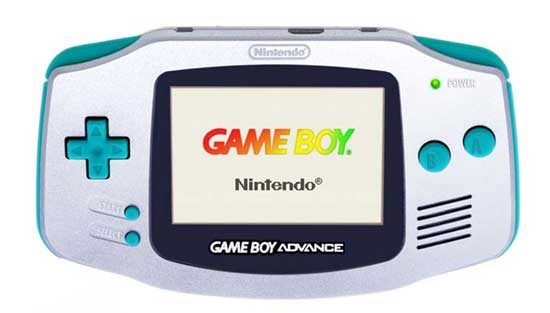 Starting with the first generation “Game Boy”, and continuing on with “Game Boy Pocket”, “Game Boy Light”, and the color screen version “Game Boy Color”, with only minor alterations to our specifications, we have managed to top the “100 million units shipped” mark to locations worldwide. This proves how the Game Boy has continued to be the benchmark for the game industry.

Continuing this legacy, the Game Boy Advance has a 32 bit CPU which greatly expands the computational abilities, and data processing features. With optimum processing power it raises the bar for the expressive range of software. Also, to relay this message with impact, the screen is a reflective TFT color LCD which utilizes the newly developed high contrast white panel. The screen size has been increased to 2.9 inches, and image processing is not only faster, but also using a finer display, it allows for a more vivid image than before.

An L and R Button were added opening up the possibility for a wider variety of operations. For sound, a PCM Stereo sound generator is being used. Through the CPU the overlapping of sound sources can be accomplished making possible the playback of multiple tracks simultaneously. Additionally, by employing a special communication cable for connection, up to four players can play together by linking up.

All of the functionality has been upgraded and it has compatibility to handle the wide selection of Game Boy software already on the market.

Developers can use the C programming language to take advantage of this functionality and create software at a low cost. Based on the foundation of a developer-friendly environment and a system configured with few restrictions, developers can create an unequaled level of entertainment and create the kinds with the kind of depth everyone will want to experience.

Capturing the imagination of both developers and users as the next generation of game entertainment, there is no doubt that the Game Boy Advance will continue to be the benchmark for the game industry as the new breed of Game Boy.