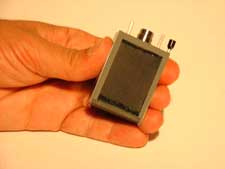 The extensive article describes the unique features of the Aluminum-Power technology and the extended capacities and power output of the aluminum-air fuel cell.

The article notes that “compared to lithium-ion and nickel cadmium batteries, the aluminum-air battery provides an estimated 75 times more energy density plus greater output over a longer battery lifetime.” To date, the Aluminum-Power battery has achieved 800Wh/kg with peak currents of 7 amps recorded. Aluminum-Power scientists believe that 4,000/Wh/kg is theoretically possible.

The article also notes that Aluminum-Power has set a 2001 target of 24 hours of talk time and 30 days of standby time for cell phones powered by the company’s aluminum-air battery.

Developed over the past five years, the Aluminum-Power aluminum-air cell has a high energy to weight ratio and because of its simple design, its dimensions can be customized to fit small and large technology.

The report also noted the ‘green’ nature of the Aluminum-Power fuel cell, particularly its recyclability. The article referred to extensive research that “shows the products of reacted aluminum to be environmentally benign.”

The article quoted Rafael Ferry, Vice President, Marketing, as saying the company is now in the pre-production stage for its aluminum-air batteries. The company is also actively working on the production of prototypes that are sized for home power supply as well as electric vehicles. These should be available next year.

Mr. Maislin has built a successful career developing start-up opportunities and most recently was President of TeleMedisys Inc., a remote medical resource centre that was acquired by Bell Canada/Ameritech. Prior to this, Mr. Maislin served as Chief Executive Officer of Seiko Communications, President of Scotpage and Vice-President of Maislin Transport.

Mr. McCoubrey has had an outstanding career in the communications industry, serving 20 years with Young & Rubicam Inc. as Executive Vice President, Director and Chairman, CEO Canada, and most recently led the Canadian Broadcasting Corporation through a restructuring initiative as Executive Vice-President and Chief Operating Officer, and President and CEO of Ad Interim.

Aluminum-Power is a Canadian-based high-technology company which has perfected proprietary aluminum and oxygen fuel cells that offer significantly higher power output over extended periods. The company is currently focusing on commercializing its technology for the portable electronics industry.

Aluminum Power has developed a self-contained power source that promises minimum environmental impact. Aluminum Power’s Al-fuel cell is composed of an aluminum anode set in an alkaline solution and an oxygen diffusion cathode. Contained by a self-recharging cartridge, the fuel cell’s specific output is 2.5wt*hr/cm3 – far greater than any available fuel cell or battery currently on the market. The emission-free oxidation of aluminum provides a power supply unmatched in terms of cost, efficiency and energy output.

While the average Lithium Ion or Nickel Cadmium battery allows up to 120 minutes of talk time, the Al-fuel cell will provide for 25 hours of talk and up to 240 hours of standby in digital mode. Similarly, the maximum wireless access of conventional laptop computer is about two hours. In contrast, the self-recharging aluminum power cell will easily accommodate up to 24 hours of operation.